In another area of my life, I curate news about #kindness and #generosity for @notevery1sucks. Recently I came across this Random Act of Kindness with a birthday link. It’s sweet enough to share: 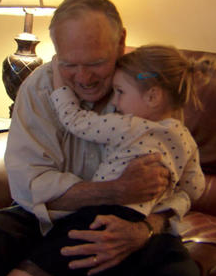 Widower 82-year-old Dan Peterson was in the grocery store six months after the death of his wife when a four-year-old girl named Norah approached him. The girl’s mother told CBS that the little one tapped Dan, a stranger, on the shoulder and blithely announced: “Hi, old person. It’s my birthday today.” She then promptly demanded a hug.

Dan happily complied, and Norah then asked her mother to take her picture with her new friend. Dan was moved and says he told her, “This is the first time, for quite a while, that I’ve been this happy.” To this day Norah visits Dan once a week.

This is a lovely example of how easy it is to bring happiness to others with a small connection. What if we all took a page from the book of a four-year-old and made more of an effort to make people feel loved?

Of course, we can’t all demand hugs on our birthday — it’s not socially acceptable and after a certain age is no longer cute — but this is an extension of the idea of doing kindness for others on your own special day.

Birthdays are about making each individual feel special — even if you are taking the opportunity to treat yourself better for that one day. It’s almost as if Norah read my post, Birthday Kindness Pass It On . Those feeling generous on their special day might also get some ideas from Donating a Birthday.

I’ve written previously about kind folks donating as part of their birthday. If I find a current example I post it on twitter under #generousbday. Today, though, I want to share a past occurrence of birthday generosity. Author Robert Louis Stevenson, who you likely know best for Treasure Island, gave up his birthday to a 12-year-old girl.

Annie Ide, daughter to the U.S. Commissioner to Samoa where Stevenson was at the time living, was churlish about having been born on Christmas Day. So, Stevenson, wrote up a contract granting her rights to his November 13 birthday.

“…considering that I, the said Robert Louis Stevenson, have attained an age when O, we never mention it, and that I have now no further use for a birthday of any description…” he transferred “All and Whole of my rights and privileges in the 13th day of November, formerly my birthday, now, hereby, and henceforth, the birthday of the said A. H. Ide, to have, hold, exercise and enjoy the same in the customary manner, by the sporting of fine raiment, eating of rich meats and receipt of gifts, compliments and copies of verse, according to the manner of our ancestors.”

He did ask that she add the name Louisa to hers “at least in private” and charged her to use the “birthday with moderation and humanity.”

The document was even witnessed and sealed before being sent on to the lucky girl. He was only 41 when he made the donation, but regrettably died three years later succumbing to the ill health that had brought him to Samoa in the first place.

Perhaps it’s karma that the world-renowned author of Kidnapped and Dr. Jekyll and Mr. Hyde is now consistently feted on his “unbirthday” in his native Scotland on RLS Day.